Synopsis: In the bestselling tradition of works by such authors as Susan Orlean and Mary Roach, a New York Times reporter and Pulitzer Prize finalist explores why so many people—including herself—are obsessed with horses.

It may surprise you to learn that there are over seven million horses in America—even more than when they were the only means of transportation—and nearly two million horse owners. Acclaimed journalist and avid equestrian Sarah Maslin Nir is one of them; she began riding horses when she was just two years old and hasn’t stopped since. Horse Crazy is a fascinating, funny, and moving love letter to these graceful animals and the people who—like her—are obsessed with them. It is also a coming-of-age story of Nir growing up an outsider within the world’s most elite inner circles, and finding her true north in horses.

Nir takes readers into the lesser-known corners of the riding world and profiles some of its most captivating figures. We meet Monty Roberts, the California trainer whose prowess earned him the nickname “the man who listens to horses,” and his pet deer; George and Ann Blair, who at their riding academy on a tiny island in Manhattan’s Harlem River seek to resurrect the erased legacy of the African American cowboy; and Francesca Kelly, whose love for an Indian nobleman shaped her life’s mission: to protect an endangered Indian breed of horse and bring them to America.

Woven into these compelling character studies, Nir shares her own moving personal narrative. She details her father’s harrowing tale of surviving the Holocaust, and describes an enchanted but deeply lonely upbringing in Manhattan, where horses became her family. She found them even in the middle of the city, in a stable disguised in an old townhouse and in Central Park, when she chased down truants as an auxiliary mounted patrol officer. And she speaks candidly of how horses have helped her overcome heartbreak and loss.

Infused with heart and wit, and with each chapter named after a horse Nir has loved, Horse Crazy is an unforgettable blend of beautifully written memoir and first-rate reporting. 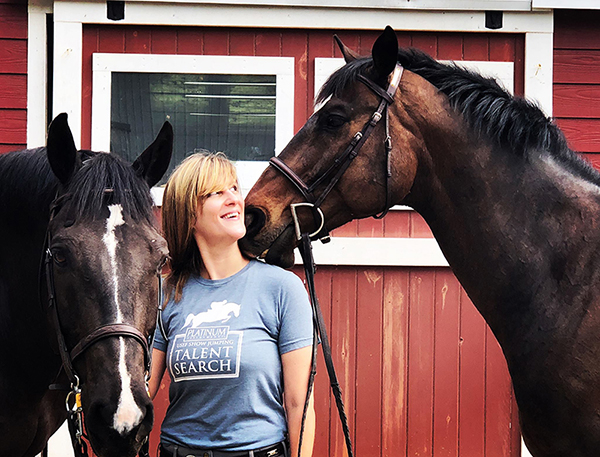 Sarah Maslin Nir
Sarah Maslin Nir has been a staff reporter for The New York Times since August 2011. She currently covers breaking news for the paper’s Metro section. Before that, Ms. Nir was a beat reporter covering the boroughs of Brooklyn, Queens and Manhattan.

Ms. Nir was a finalist for the 2016 Pulitzer Prize for “Unvarnished,” her more than yearlong investigation into New York City’s nail salon industry that documented, in two parts, the exploitative labor practices and health issues manicurists face.

From 2010 until the end of 2011, Ms. Nir was The Times’s “Nocturnalist” columnist, covering New York City’s nightlife. As Nocturnalist, Ms. Nir covered more than 200 parties in 20 months, once attending 25 parties over five days. She has interviewed celebrities from Kanye West to Alec Baldwin, and had an audience — of sorts — with the Queen of Spain.

Over the course of her breaking news work, Ms. Nir covered the escape of two inmates from the Clinton Correctional Facility and camped out overnight at Zuccotti Park with the Occupy Wall Street protesters, covering the dismantling of the camp as it happened via Twitter. Before becoming a staff member, Ms. Nir freelanced for 11 sections of the paper, traveling to the Alaskan wilderness, in search of people who prefer to live in isolation, and to post-earthquake Haiti.

In September 2015, Ms. Nir was recognized with the New York Newswomen’s Club award for in-depth reporting. In November 2015, The Forward named Ms. Nir one of the 2015 Forward 50.

Before joining the Times, Ms. Nir lived in London, where she was a freelancer for several national and international publications.

Ms. Nir is not related to any other journalists with a similar name.

A born and raised Manhattanite, Ms. Nir graduated from the Columbia Graduate School of Journalism, and from Columbia University, where she studied politics and philosophy.