Synopsis: Winning Horsemanship by Joanne Verikios is a fantastic resource for beginners, intermediate and advanced students alike. Packed with information, wisdom and illustrations, you will pick up new secrets and insights every time you open it.

If horses are your passion and you:
dream of taking your horsemanship to the next level;
have ever left the arena thinking you could have done better – or wondering why you didn’t;
want to have more fun with your horse, instead of wondering if you are doing the wrong thing;
feel that a breakthrough is close but just don’t know how to get past a sticking point;
would like to create a truly harmonious partnership where your horse is happy, smart and confident and responds willingly, free from fear or confusion;
want to achieve horse-life balance and enjoy loving relationships with the important people in your life;
are looking for advice that is simple, timeless and gimmick-free; or
just feel that you could simply use some self-belief, inspiration and motivation 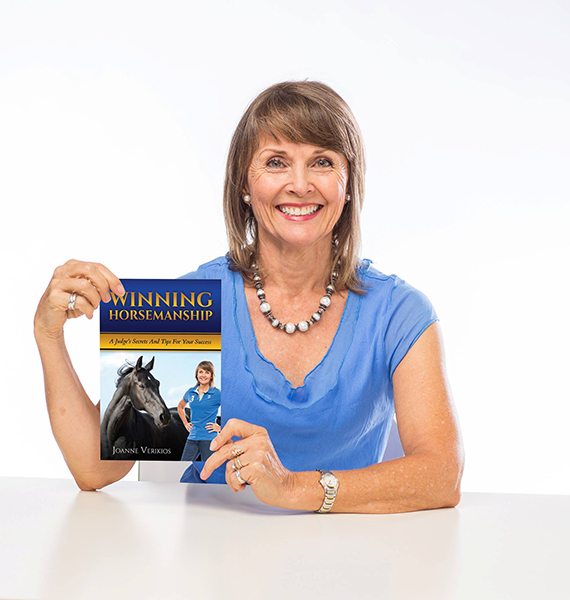 Having received her first pony at the age of nine, Joanne’s earliest ambition in life was to be a bareback horse rider in a circus. Although she never ran off to join the circus, after working her way through the Pony Club ranks, she earned the qualification of Pony Club instructor at the age of sixteen. One of the many highlights of her early riding career was being a member of the Downs Pony Club team that won the Duke of Edinburgh Pony Club Games Championship in 1972. She completed a Farriers Course at the then Queensland Agricultural College (QAC Gatton), focusing on trimming and shoeing as well as learning to forge and shape horseshoes.

Joanne won a Commonwealth Scholarship and went on to graduate from the University of Queensland as a Bachelor of Arts (BA) with Honours in Russian.

While working at the Australian Public Service, Joanne qualified for an Australian Owner Trainer Permit to train and race Thoroughbreds. She also pursued her love of horses by founding the Highborn Warmblood Stud, where she was Stud Manager for sixteen years. The horses Joanne bred went on to win both under saddle and in breed classes, including Royal Show Championships. They included the stallion, Highborn Powerlifter, who passed Colt Selection and Performance Testing with flying colours.

In addition to serving on several horse sport committees and officiating at many shows and events, Joanne is a past Federal President and Federal Registrar of the Australian Warmblood Horse Association, which she continues to serve as a Classifier and Classifier Trainer, Judge and Judge Trainer and National Assessment Tour Australian representative. In recognition of her outstanding contribution and commitment to the Association for over 30 years, Joanne was granted Honorary Life membership in 2015.

Joanne was also an Australian Powerlifting Champion, holding State, National, and Commonwealth records. Twice, Joanne represented Australia at the Women’s World Powerlifting Championships and was ranked seventh in the world both times. In peak condition, Joanne was able to deadlift more than triple her bodyweight. Some of her feats of strength are recorded in the 1989 and 1991 Guinness Book of Records with Australian Supplement.

Joanne has published articles or featured in many equine publications including Equestrian Country, Hoofbeats, Horsezone, Horses & People, The Horse Magazine, Australian Horse and Rider Yearbook, and Hoofs & Horns. She has also published articles in several lifestyle, recreational and sports magazines, including Viviamaridi, Bellydance Oasis, SPORTZlife, and The Pump.

Joanne lives with her husband in Queensland, Australia.