Synopsis: The Women of War Series is a not-for-profit independent film series created by an Invisible Women of War. The mission of the Women of War Series is to highlight the stories of women whose lives have been shaped by the personal experience of war. In episode one, Invisible, three American Women of War share their full experiences in an intimate one-on-one setting. Though women have served in every American conflict in history, we served in combat in record numbers during the post-9/11 war era. However, due to express restrictions against combat service by women, the vast majority of us served in combat without training or recognition. As a result, we have been sentenced to lives of Invisibility. We expected and accepted that our enemies would hurt us – we did not expect it from our country.

I was born to a life of impossibility, heartbreak and hopelessness but, I always knew I would escape. My signature motivation – a profound sense of justice was born with me. A witness to the crimes of poverty and hatred, both against me and all those around me, I clawed my way to becoming a lawyer. I began as a Public Defender, often fighting for the deplorable in the name of the Constitution.

In pursuit of greater justice, and with awareness of the world’s evils, I joined the Air Force, spending seven years as a distinguished officer, litigator, and warrior. In 2007, I was truly in shock and awe when I deployed to Iraq to “serve” in a war that itself was a crime. I volunteered for the most dangerous of the available positions because I was told this was the path to delivering the most justice – but the truth was the exact opposite. I was really a pawn in a sham court system, set up to detract from the crimes committed against the detainees at Abu Ghraib. In this position, I experienced many life-changing events: I felt the Earth shake through me as a man wearing a bomb, praying to God, blew himself through a market, killing 150 people in an instant; I led a makeshift team through the blood trail of our fallen bodyguard after a mortar attack on our courthouse; I prosecuted “terrorists,” heard their explanations and put them on death row; and I pondered daily the unimaginable horror endured by the people of Baghdad during our campaign of Shock and Awe.

The profound physical and emotional injuries I received in Iraq rendered any “normal” life impossible for me. After years of teetering on the brink of destruction, I have forged a new mission: the pursuit of justice through filmmaking – Litigation By Other Means. I now prosecute cases with a camera – a weapon potentially far mightier than the pen and sword ever dreamed. I strive to show my viewers their roles in so many of our daily crimes against each other. In my work, I will always propose a clear course of action: something each one of us can do now to face the actions of the past, stand against them as they exist in the present, and compel us all toward a more just future.

The truth is that, despite our great intentions, ideals and imaginings, ours is a criminal and reprehensible history of slavery, slaughter, genocide, theft, rape, imprisonment, torture, greed and terror – for, I assure you, there are few things more terrifying than having American Airpower rain down on your city for days on end, or having your skin set ablaze by Napalm from the sky, or being indiscriminately mowed down in a homicidal frenzy of Hotchkiss guns…

This “history” matters now because it continues now.

It is my most fervent belief that the old ways of doing things – with a blind eye toward all that does not please us – must change. To achieve this, we must see, own, and use our individual privileges to make right all that has so long been wrong. It is my most fervent hope that, in telling the dark side of the American story, while suggesting good and righteous possible courses of remediation and action, we can forge a future that truly guarantees – by finally delivering – Life, Liberty and Justice – to all of us. 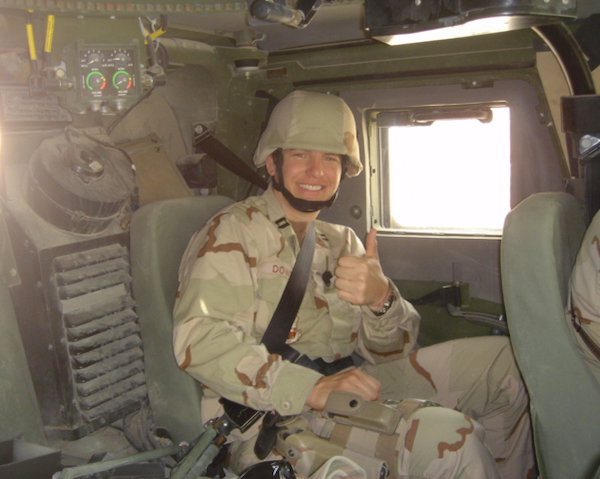 Major Gloria A. Downey was medically retired from the Judge Advocate General’s Corps of the United States Air Force in May 2009. Prior to her retirement, she was hand-selected by the Judge Advocate General of the United Sates Air Force to fill a highly sought after Senior Defense Counsel position. Her last assignment before retirement was as an Assistant Staff Judge Advocate for the 435th Air Base Wing law office at Ramstein AB, Germany. Major Downey served as the Chief of Litigation while also filling a variety of other roles including Deputy Staff Judge Advocate and working with junior trial counsel as the Senior Litigation Attorney. While assigned to Ramstein Air Base, then-Captain Downey deployed to Baghdad in 2007 where she prosecuted insurgents in the Central Criminal Court of Iraq.

Major Downey was very actively involved in the military’s sexual assault crisis and response, both as a prosecutor and defense attorney. As a prosecutor, Major Downey: created sexual assault prevention seminars for dormitory residents which were benchmarked by the Air Force and the Department of Defense; was appointed to respond to a high level inquiry by the Department of Defense regarding the prosecution and defense of sexual assault allegations in the military; and was the driving force behind expanding rape prosecutions to include cases of rape based on psychological force alone. As a defense attorney, Major Downey developed and disseminated a new strategy for overcoming rape shield laws in appropriate cases.

Major Downey’s other JAG assignments were as the Area Defense Counsel at Osan Air Base, Republic of South Korea where she represented hundreds of military members through all aspects of their military justice actions including dozens of courts-martial and discharge boards. Major Downey was competitively selected to this position while serving as Senior Litigation Attorney and Chief of Military Justice at Travis AFB, California. In these roles, Major Downey served as an “in-house” circuit trial counsel for the 60th Air Mobility Wing legal office assisting trial counsel in the preparation and prosecution of military justice cases while also performing duties as the Chief of Military Justice, overseeing the base’s entire criminal and disciplinary program.

Major Downey was commissioned as a Judge Advocate in 2002. Prior to being commissioned as a JAG, she served as an Assistant Public Defender in Ocala, Florida and Miami, Florida. She worked on all levels of the Florida criminal justice system including felony, misdemeanor, juvenile and traffic divisions. During her four years as a public defender, she represented thousands of indigent clients facing criminal prosecution.

Major Downey was admitted to the Florida Bar in 1997, after graduating from the University of Miami School of Law in 1996 and the University of Florida, with a focus on Political Science
and Sociology, in 1993. Climbing up and out of the poverty and disillusionment of the life she was born into, Major Downey received her GED at 16 years old, after completing only the eight grade, then attended and graduated from Broward Community College at 18 years old, earning entry into her state’s flagship university.

While deployed to Baghdad, Major Downey was injured during multiple mortar and rocket attacks, rendering her unfit for further military service. Despite her pending medical retirement, Major Downey’s supervision pressed for her promotion to Major in recognition of her outstanding service. Major Downey was permanently retired as a Major in May 2009. Major Downey became a member of the California Bar in May 2009; she lives in California. Due to the limitations of her physical and emotional injuries, Major Downey now only practices law on a Pro Bono basis.

In 2015, Major Downey earned her Master of Fine Arts in Directing from Academy of Art University in San Francisco, CA and now works to share her unique experiences with the world through the medium of filmmaking. Her thesis film, Forgive Me Father, has received numerous honors and has been included in several film festivals. Major Downey is now pursuing a Master of Arts in Screenwriting and is working on a feature film script encapsulating her personal war experiences in Iraq and the devastating impact the profound negligence of the Air Force and the VA have had on her life since her deployment.

Currently, Major Downey is continuing her work on the Women of War film series, which is dedicated to the universal experiences of all women of war. The second episode, Untouchable, filmed on the Pine Ridge Reservation in South Dakota, will be completed in the Fall of 2021.