Synopsis: High school student Enoch Miller has lived in the town of Narragansett, Rhode Island, his entire life but has never learned of the Indian tribe after which it is named. He’s assigned to research a monument to Chief Canonchet, former leader of the Narragansett Tribe, as a project for his history class. Enoch’s entire conception of his hometown is shattered upon learning about an incident of local colonial-era genocide which he’d never heard discussed in his entire life: the Great Swamp Massacre. Shocked, but determined to learn the truth behind his town’s history, Enoch visits the seemingly forgotten site of the massacre where he faces the spectre of history.

It was during my first year of study at the University of Rhode Island that I first heard of “The Great Swamp Fight”, a historical event that my political science professor briefly mentioned as a “battle” that had taken place locally. The notion of a local historical event significant enough to be mentioned in class, even if fleetingly, was enough to capture my interest: I decided to seek out the location of this “battle” and see it for myself. Though I couldn’t have known it at the time, I was embarking on the single most valuable and profound academic experience I have yet known in my life.

I quickly learned that had taken place in the Great Swamp, a large swath of land in southern Rhode Island, was no battle at all: it was a brutal massacre and a preemptive strike by the colonial forces of the day. In 1675, King Philip’s War had begun as New England colonists sought to expand their occupancy. The Narragansett Tribe was one of the most influential and powerful forces in the region, though they chose to remain neutral in the early months of the war. Deep within the Great Swamp there was a settlement of over a thousand Narragansett noncombatants: women, children, elderly, and the sick. In the brutal December cold of 1675, a heavily armed colonial militia besieged the settlement in the middle of the night and murdered nearly all of those within. The massacre concluded when the colonists burned the settlement to the ground with many of its inhabitants trapped inside; after it was all over, upwards of a thousand noncombatants had been murdered. Chief Canonchet, the Narragansett leader, was later captured by colonists and offered an ultimatum of surrender or death. Canonchet refused the ultimatum, and when informed he would be executed, said his last known words: “I like it well. I shall die before my heart is soft and before I have spoken a word unworthy of myself.”

Outside of a fleeting mention in class as a “fight”, this incident of colonial genocide seems to be practically unspoken of in Rhode Island, let alone other states, and is almost entirely unknown to young people. Upon looking for the location of the massacre during my research, I found directions to the Great Swamp Monument, located in nearby West Kingston.

The Monument was difficult to enter and, apart from existing in navigation systems, remains completely unmarked. The path to the Monument lies beyond a heavy gate on an unpaved road: it’s a long walk through seldom-visited swampland. Miles into the swamp, the Monument stands in a distant clearing: a massive obelisk surrounded by smaller stone markers. From the first time I visited in February 2019, I knew I had to make a film about the Monument. The memory of the massacre had to be addressed.

Over the following months, I wrote drafts of a script about a young man discovering the Monument and exhuming a long-buried history. Although the beginnings of the story were there, it always felt like something was missing. In September of 2019, I visited the main office of the Narragansett Indian Reservation. With the current copy of my script in hand, I introduced myself to Medicine Man John Brown, a spiritual and cultural leader of the Tribe. Despite my being an outsider, he took the time to read my script and listen to my ideas. Mr. Brown was supportive of the project and gave me notes on key sections of the script, especially on how the story of the Great Swamp Massacre would be portrayed to ensure its historical and cultural accuracy. Additionally, he suggested I see ‘how the Tribe does things’ firsthand, and invited me to a cultural ceremony of remembrance at the Monument. It would be a somber occasion, he told me, and it would likely help me to understand what the Massacre and the Monument site mean to the Narragansett People. My film student instinct prompted me to ask him if I could film the ceremony.

“It might not be something that’s filmable,” he said.

I agreed not to film the ceremony. I felt honored to be allowed to attend such a significant cultural event.

I was one of two whites in attendance. A group of about thirty Narragansetts as well as visiting leaders from neighboring tribes in New England were present.

The Medicine Man led the ceremony along with the Chief Sachem. Three small fires were burned in front of the Monument: a fire of the past, a fire of the present, and a fire of the future. They gave speeches at each. Suddenly, the place was taking on a completely different feeling: gone was the desolate place I had visited in the winter by myself. The swamp was alive with energy.

“The Europeans thought they were bringing order to chaos, though they only brought chaos to order,” the Medicine Man spoke at the fire of the past.

“Though we lost many that day, they never left us. They are here with us, now, watching.”

The overwhelming emotion of it all was overwhelming: the Medicine Man’s words, the weight of the Massacre, and the shock of standing amongst the People whom had been there all along– the same who are so sidelined and betrayed by modern society.

The ceremony reached the fire of the present. “I invite any young people to speak. This is your fire,” the Medicine Man said. No one was going up. The fire burned on its own, the quiet insect chirps of late summer hanging in the air. So much was going through me, and then, without thinking, I stepped up to the fire.

“We have a visitor,” the Medicine Man said.

I stood before the fire, before the Narragansetts. In a shuddering voice, I began:

“I’m not from here. I’m from Connecticut. And I’m descended from colonials. I know what happened here.” What was going through me at the time gives me goosebumps still. I broke down and wept before them all.
“I bear the guilt of my ancestors, and I’m so sorry for what they did. But I believe that, together, people of all nationalities can come together and make a better world.”

I continued to weep.

“Young man!” A voice called out to me. A Narragansett man approached me and hugged me in a tight embrace. I embraced him. It was an embrace of forgiveness.

After that day, there was no shred of doubt in the story I had to tell. Though I never could have predicted how it would turn out, this project became a deeply personal story that not only comes from a place of protest, but from the overwhelming emotions I went through in discovering the Massacre, connecting with the Narragansett Tribe, and the ceremony that day. And for so long, the script had been without a title; I finally came up with Living Swamp, which would be the final name of the film. I chose this title because of my experience at the ceremony: despite the tragic history of the Great Swamp, there is much more to the site of the Monument than sadness. The Great Swamp Monument is sacred ground that is held dearly by the Narragansett People, and with that importance and energy, the place truly felt alive during the ceremony and every time I’ve visited since. 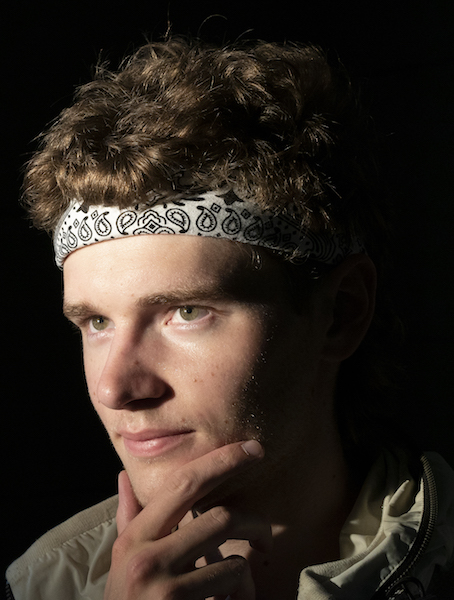 Lionel R. Jeffries is a film student at the University of Rhode Island with roots in Connecticut’s Quiet Corner. Since high school, Jeffries has been creating horror short films as well as participating in film festivals. In March of 2018, he attended the 8th Annual Queens World Film Festival where he won the Jury Award of Emerging Filmmaker, an honor for rising directors.